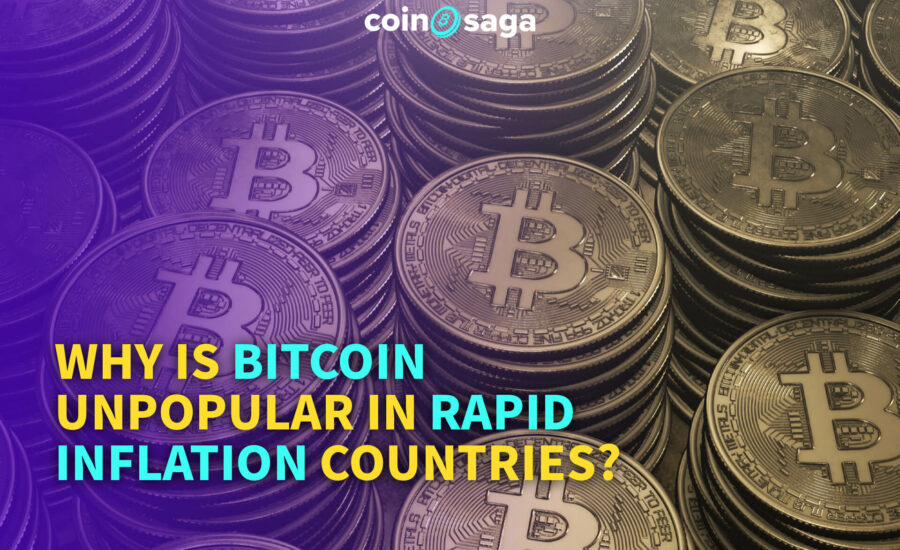 Why is Bitcoin Unpopular in Rapid Inflation Countries?

There is a very common view in the cryptocurrency industry: that those countries that are suffering from severe inflation and excessive devaluation of the fiat currency have a huge demand for Bitcoin.

Many people are convinced of this, and changes in Venezuela, Argentina, Nigeria, Zimbabwe, and other countries are often used to support this view. Optimists have made bold statements: In the near future, digital currencies such as Bitcoin and Dash will not only save Venezuela, but also bring revolution to Africa.

The boss of Coinbase even set up a charity fund to donate digital currency to the poor. At present, it has raised USD 4 million. Ripple has compiled a list of blockchain public welfare projects, of which, nearly 250 projects are helping in developing countries.

Everything looks good, but the facts are far from it:

It is said that Bitcoin outperformed some fiat currencies, so why are these emerging markets not using digital currencies in large numbers? The gap between facts and ideals is so great, what is the problem? Why can’t Bitcoin become popular in rapid inflation countries?

The mobile networks and power systems in many economically underdeveloped countries are very unstable and cannot provide stable support for online payments. The user experience is very bad. Not to mention Bitcoin mining, a normal transfer may not be completed.

In many parts of the world, due to the heavy burden and slow speed of mobile networks, even the needs of basic communications cannot be met. For example, in Nigeria, most people in the country can only access 2G or 3G networks.

Data from Africa shows that although the power coverage in some places is very wide, the quality is poor. In Nigeria, most areas are covered by electricity, but only 18% of the lines work normally. In 2019, Venezuela experienced large-scale national power outages in March and July, and small-scale power outages and power curtailments have occurred from time to time since. This series of data means that mobile network transactions may often fail, which will directly lead people to distrust in digital payment systems. In addition, if power often goes down when making payments, this will undoubtedly create opportunities for online fraud.

As we all know, some governments around the world have banned cryptocurrencies, but these bans are often tricky to enforce. At this time, in addition to regulation, the most powerful means for the government to deal with cryptocurrencies may be to disrupt the Internet itself.

If a technology product wants to be used globally, it needs to be more inclusive, and it must be considered for older, lower-cost mobile devices. At the end of 2019, Coinbase’s charity fund launched a pilot cooperation with Zcash in the city of Santa Elena de Uylen in Venezuela, and they finally came to the conclusion:

“We have to build a digital currency wallet that can run on Android 4. Since 2012, more than 75% of Venezuelan users are still using this version of the Android system. We did not expect intermittent power outages, and cryptocurrency requires the Internet and electricity to run. “

Unlike most regions, the risk of using mobile phones to pay in countries with high crime rates is high. Nigeria is famous for the large number of mobile phone theft markets. It is estimated that 110,000 mobile phones are stolen every month in Venezuela. The New York Times wrote in an article that in Venezuela, in order to avoid being robbed, people will carry a fake mobile phone with them, or they will always change their daily routine.

Although network remittance can largely avoid this problem, the recipient uses platforms such as Localbitcoins to exchange Bitcoin for fiat currency, but because these sites lack protection measures, scammers still prevail.

Digital currency usually attracts those who do not trust traditional institutions, and it is not simple to get a large number of users to trust complex systems like the blockchain. In fact, people are more willing to turn the balance of trust to face-to-face transactions between acquaintances than to anonymous systems on the Internet. So, what can be done to increase the usage of Bitcoin in these emerging markets?

It is very difficult to establish in emerging markets, and it is easy for people to give up, but it is precisely in these countries where if the fiat currency is defeated that the influence of digital currencies is greatest. The technical level of solving this problem is not difficult, but we need to change the way of thinking and optimize goals, such as:

In Iran, Venezuela, Argentina, Zimbabwe and other countries, Bitcoin is often shown as a currency in common use, which gives people the illusion that “Bitcoin is very popular in these countries.” However, in these countries where the market hardware facilities and trading environment are relatively backward, the road to mass adoption and use is still a long way off.