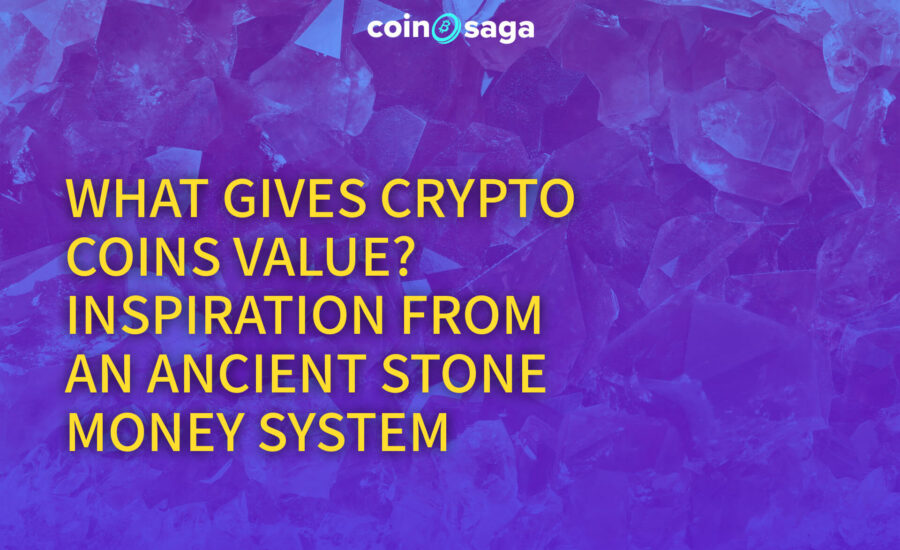 Crypto coins and the blockchain may seem like puzzling new technological concepts, but the central tenet of this cutting-edge cryptocurrency goes back way further than you might believe.

When you arrive on the tiny Micronesian island of Yap you will come face-to-face with giant stone money. Giant stone disks called Rai, which were used long ago as a symbolic form of money on the island. They truly are one of the world’s most intriguing coins.

Hundreds of these extraordinary, human-sized discs of rock are scattered all over the island; Each village even has a stone money bank where pieces that are too heavy to be moved are displayed on the malal (dancing grounds).

At a glance, these massive, heavy stone monuments (which are often taller than the people who own them) might not seem like they have a lot in common with a digital system of value that is encrypted, intangible, and basically invisible to human senses. But that physical contrast masks the stunning shared features of crypto coins and Rai – both forms of currency depend upon a public, community ledger system, that provides transparency about transactions, as well as security, and all without needing a centralized banking structure.

The extrinsic (perceived) value of a specific stone is based on not only its size and craftsmanship but also its history. If many people—or no one at all—died when the specific stone was transported, or a famous sailor brought it in, the value of the Rai stone increases by reason of its anecdotal heft.

Rai stones were and still are, used in rare important social transactions, such as marriage, inheritance, political deals, a sign of allegiance, ransoms of battle dead, or, rarely, in exchange for food. Many of them are placed in front of meeting houses or along pathways. The physical location of the stone is often not significant. Although the ownership of a particular stone might change, the stone itself is rarely moved due to its weight and risk of damage. The names of previous owners are passed down to the new one. In one instance, a large Rai being transported by canoe and outrigger was accidentally dropped and sank to the seafloor. Although it was never seen again, everyone agreed that the Rai must still be there, so it continued to be transacted as genuine currency. What is important is that ownership of the Rai is clear to everyone, not that the Rai is physically transferred or even physically accessible to either party in the transfer. In this, the Rai stone monetary system can be thought of as an early example of a distributed ledger.

The things people might use crypto coins for today are obviously different, but the most striking thing about the two forms of currency is how the ledger system, in principle, performs the same function. As with the Rai stones, information about a crypto coins’ value and ownership is managed collectively. It’s a distributed financial system as opposed to the more familiar, centralized systems involving third-party financial institutions. Eventually, Coinsaga wants to create a pure crypto casino, to provide a fair and transparent environment for all players, trustworthy because of its decentralized mechanism, rather than the authority of a third-party organization.

The economic value of cryptocurrency, like most goods and services, comes from supply and demand. Supply refers to how much is available — like how many Bitcoin are available to buy at any moment in time. Demand refers to people’s desire to own it — as in how many people want to buy Bitcoin and how strongly they want it. The value of a cryptocurrency will always be a balance of both factors.

There are also other types of value. For example, there’s the value you get from using a cryptocurrency. Many people enjoy spending or gifting crypto because it gives them a sense of pride to support an exciting new financial system. Similarly, Coinsaga Casino encourages players to use crypto coins including Bitcoin because people like the low fees and transparency.

Stay tuned for more new and exciting features of the Coinsaga crypto casino.