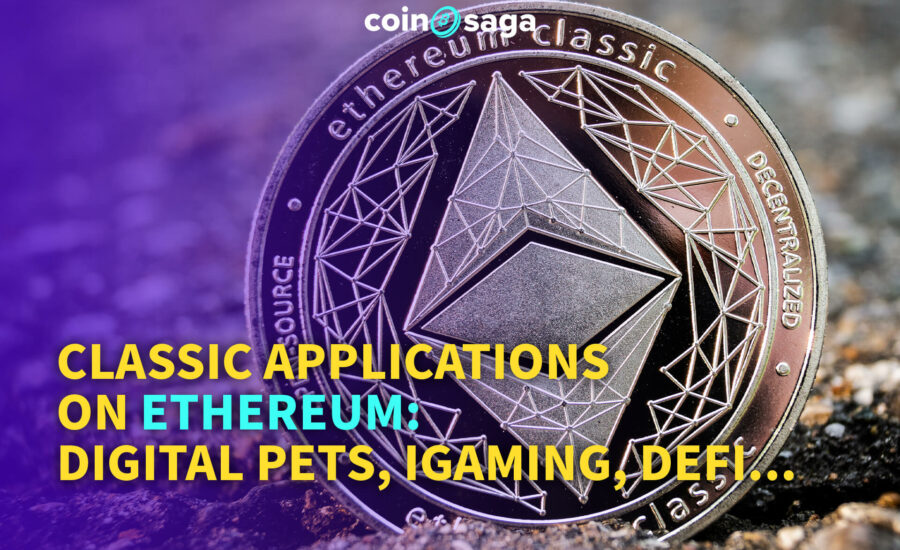 Ethereum is known as “the next generation of smart contracts and decentralized application platforms”, that is an open-source, public blockchain technology platform with smart contract functions. At present, Ethereum firmly occupies the second place in cryptocurrency, second only to Bitcoin.

Ethereum has a Turing complete language, which can give users complete freedom. Therefore, from its launch in 2014, its potential was immediately recognized by technical individuals and market investors and widely used.

So, what are the main DApps available on Ethereum at the moment?

The most well-known proponent of this technology is The DAO project.

The DAO was a project created by members of the Ethereum community in 2016. It was a sensation at the beginning. It was once the largest crowdfunding project on Ethereum and raised 12.7 million ETH. At that time, the contract was 150 million US dollars. But unfortunately, after only one month from its launch, a hacker used the vulnerability of the smart contracts to transfer funds, which eventually led to the Ethereum fork.

The first “phenomenal” application is Crypto Kitties, a pet development game built on the Ethereum blockchain, commonly known as “Ether Cat”. In the game, users can breed, trade, and even auction the kittens, not only is it popular in the crypto community, it even has followers outside.

This game uses the ERC 721 standard, which is a standard interface for smart contracts for Non-Fungible Tokens. To put it simply, each ether cat is equivalent to a Token of ERC721, which has Token genes with different attributes, and the cat number is actually the Token number. In the ERC 721 standard, cats are called NFT (Non-Fungible Token). This guarantees the uniqueness of each ether cat and its progeny, which cannot be copied and destroyed.

Fomo 3D is a distributed, trustless predictive gambling game that runs directly on the Ethereum network.

The iGaming development team of this game deployed the code on the Ethereum network. At the beginning of each game, users spend Ethereum to purchase a prop called a Key to participate in the game. After the Key is bought by a player, it takes a higher price to buy it again. As long as you can become the last buyer, you get 48% of the reward in the entire prize pool.

In the first round of Fomo 3D, the player who won the final game won a huge sum of 10,469 Ethereum, equivalent to approximately USD 2 million.

However, in the game world of Fomo 3D, it is almost impossible for ordinary players to become the final big winners. The winners of the first round of games more than likely used the loopholes of the application, causing Ethereum’s short-term congestion and being criticized by the market. At the same time, this game has strong speculation, and the market has become increasingly controversial.

Meta Mask is a browser wallet plug-in, you do not need to download the application, you only need to add the corresponding extension to your web browser.

This is equivalent to turning your browser into an Ethereum user-end and implementing the “light wallet” application, so that Ethereum distributed applications (DApps) can be run directly on your browser, which is safe and convenient.

The charm of the prediction market is that even if no one knows all the information, it is possible to make a relatively accurate prediction on the outcome of an event. Here are two of the main applications that use this:

Gnosis is a market prediction platform based on Ethereum, which can create a game between users without the operation of any trusted entity. This solves the issue of the traditional prediction market which relies on centralized institutions to determine the results, providing transparency.

The goal of Augur is to achieve an honest, open, and transparent prediction market. Users participate in the game in a decentralized manner.

Decentraland: a VR virtual reality platform based on Ethereum

Users can create and experience virtual reality technology on the Decentraland platform, and monetize content and applications to achieve these functions, which need to be completed in Decentraland’s three-dimensional virtual land.

In the world of Decentraland, users have ownership of land through Ethereum-based accounts and MANA issued by Decentraland. They can purchase land, services and products in the virtual world, and create their own buildings on the land.

The amount of land is limited, and it is decentralized, with clear property rights, which makes the seemingly virtual land produce circulation and value.

Decentralized finance—often called DeFi or open finance—refers to the economic paradigm shift enabled by decentralized technologies, particularly blockchain networks. Among the Defi applications on the Ethereum network, the most famous is MakerDao.

MakerDAO is a protocol behind the stable coin DAI — a cryptocurrency that maintains a 1:1 peg to the USD. Think of 1 DAI as $1. What makes it unique is each DAI is backed by Ether instead of a 3rd party claiming to have the required collateral. Since Ether is volatile this poses some interesting challenges to maintain the peg.

DAI is arguably the most successful project built on Ethereum at this point in time.

The basics of the system, you deposit/send Ether to Maker’s smart contract, creating a Collateralised Debt Position (CDP). Users opening a CDP through Maker generally do so to gain leverage. Users can collateralize ETH, generate Dai, and then purchase additional ETH with their newly minted Dai, resulting in the user having leveraged exposure to ETH. Since the debt is measured in Dai, if the price of ETH goes up, users can pay off their outstanding debt with less ETH, then hold onto the remaining ETH once the CDP is closed.

The above are the mature applications of Ethereum technology, but those are a small part of all the available Ethereum applications. More of Ethereum’s iGaming ecological picture still needs to be developed and improved by developers and market participants. Coinsaga is playing its part by developing Ethereum casino games, which are due for release soon.