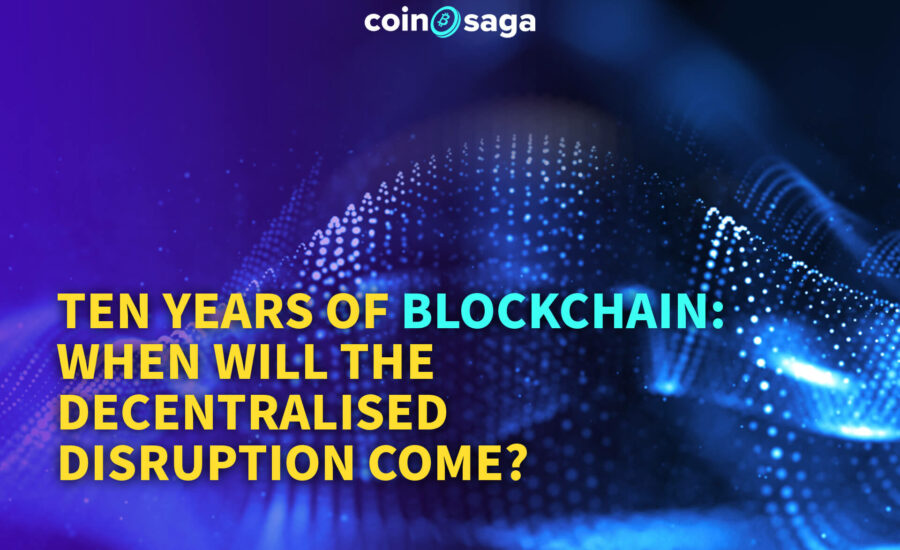 Ten years of blockchain: when will the decentralised disruption come?

When Satoshi Nakamoto developed Bitcoin he wanted to create a currency that was not subject to the control of central banks, who he believed had caused the economic crash back in 2008.

In doing so, he didn’t just create Bitcoin and the blockchain, he created the first truly decentralised currency. One where each and every single user had access to all data and where no single person or group had control.

The original goal of Bitcoin, along with most blockchain projects is to disrupt the status quo, to take away power from the few and give it to the many. But fast forward 10 years, has this happened? Let’s find out…

We only have to go back to 2017 when JP Morgan CEO Jamie Dimon said “It’s a fraud”, “It won’t end well” and that “he would fire any employee trading Bitcoin”. These kinds of dismissive comments about Bitcoin and the blockchain have been common ever since its inception in 2009. Negative media reports focusing on the association of Bitcoin and illegal activities on the dark web and beyond have added fuel to the fire of the negative rhetoric about cryptocurrency. With both governments and the media believing that the blockchain and cryptocurrency to be a temporary fad that will eventually go away.

A Change of Direction

As Bitcoin rose from $600 to almost $20,000 in 2017, both governments and businesses began to take notice and question not only “will this ever go away”, but “is there anything in this technology that may threaten our position or that we can use to improve”?

Views can change, and they can change very quickly. And Jamie Dimon is proof of this, because by 2019 he had already made a U-turn on his previous statements by announcing that not only did he regret his previous comments, but that JP Morgan would be releasing its own digital coin.

JP Morgan is not alone either. The 2 most powerful countries in the world (the US and China), after years of dismissing cryptocurrencies and making all efforts possible to limit and reduce their growth, began to make moves in the blockchain sphere. For example, with the US approving two stablecoins in September 2018, the Gemini Dollar and Paxos Standard, which will be pegged 1:1 with the US dollar.

Where are we Today?

Fast forward to 2020 and a new race has begun. One where countries are racing to create and manage their own digital currencies. For example, we wrote recently how the French Central Bank is beginning tests on a digital version of the Euro.

If we return to our original question “Ten years of blockchain: when will the decentralised disruption come?”. The answer is that it has happened already – well kind of! That might seem like a bit of a contradictory answer, so let us explain.

The disruption has occurred because governments and major corporations around the world can no longer dismiss cryptocurrencies and the blockchain. In fact, many corporations (including banks) are already enjoying the benefits of the blockchain in increased efficiency and profits. And, more importantly, China and the US are embarking on a new digital “space race”.

Now to the “well kind of”. The total decentralisation of the monetary system originally hoped for by supporters of Bitcoin seems unlikely to ever materialise. For crypto and blockchain fans this may seem a bit premature, especially in the current economic climate. However, the U-turn of Facebook and its Libra project, to one controlled by government regulation shows that governments will not give up power easily, especially if an individual or company is at the heart of a decentralised project.

The focus now is not on Bitcoin and decentralisation, but whether a US or Chinese backed stablecoin will become the most globally used digital coin.