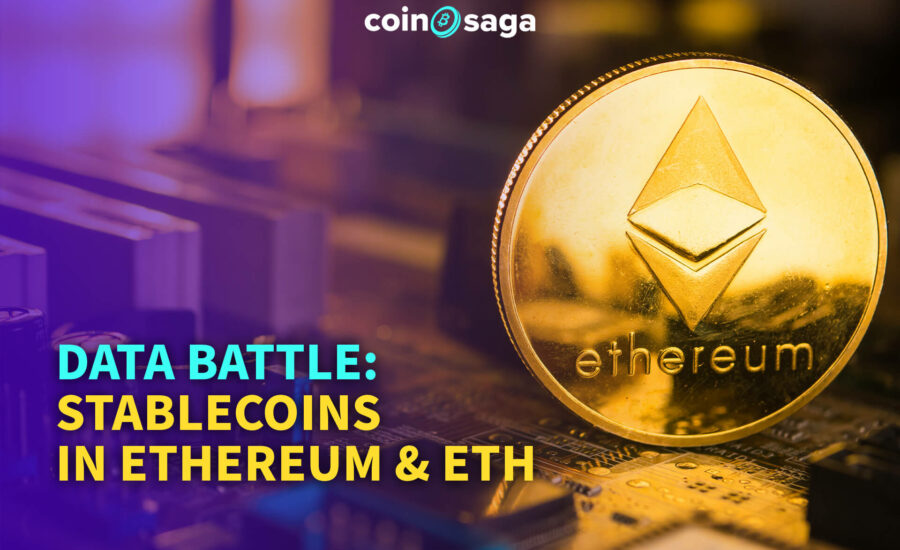 Recently, there has been an explosive growth in crypto dollar coins, also called “stablecoins”. The stablecoin circulation supply growth trend is as follow: (all data form Coin Metrics)

The types and mechanisms of stablecoins were described in detail in “Stablecoin in Blockchain: Fiat-based & Cryptocurrency-guaranteed Stablecoins”.

As the proportion of stablecoins in the economic throughput of popular public chains is increasing, let us briefly look at the use of stablecoins and their sizes.

Therefore, the market value of ETH is still much higher than the market value of other tokens on the chain. Occasionally it is claimed that if the value of non-ETH tokens exceeds the value of native tokens, this will expose the blockchain to serious risks; What about stablecoin traffic based on Ethereum? It can be said that what is more important is the actual economic throughput (transaction count) of stablecoins facilitated by these blockchain systems.

Currently, stablecoins still occupy a relatively small (but growing) proportion of on-chain transaction counts. On the Ethereum blockchain, the transfer of ETH is still more popular, while other tokens are marginalized. See below:

However, it can be said that the most important thing is the value of on-chain transactions. It can be seen from the figure below that although the transaction count of stablecoins is less, it has dominated the transaction throughput (transaction value) in US dollars on Ethereum, while other ERC20 tokens are almost insignificant.

The several surges in transaction value are mainly related to token sales. The first surge was during the token sale period of the Augur project. Several other surges included ZRX, Enigma, BNB, LEO, and Chainlink token sale activities.

However, as token sales have become less popular, and those tokens that only use Ethereum as the staging point before online before entering the next stage, the relative influence of ERC20 tokens has declined and stabilized, stablecoins have quickly jumped to the forefront.

By combining the above charts, it can be inferred that stablecoins satisfy a large amount of transaction value through a relatively small currency base (market cap). The following figure shows the “circulation” of ETH and stablecoins (measures the number of times a unit of tokens “circulate” in a year) also confirms this.

The figure above shows that compared with Ethereum’s native token ETH, the “circulation” speed of stablecoins is very fast:

In transactions, the use frequency of stablecoins is much higher than that of ordinary cryptocurrencies. This is not surprising, stablecoins have effectively taken over settlement use cases between exchanges, and now stablecoins are being used as non-bank dollar alternatives in many parts of the world.

The user base of stablecoins is still relatively small. At the time of writing, only about 1.3 million addresses on Ethereum held stablecoins worth more than $1; in contrast, wallet addresses holding equivalent ETH exceeded 12 million. Therefore, there is a small but very active stablecoin user group in the Ethereum network. They use stablecoins to frequently conduct large transactions. The price risk during trading seems to force traders to use stablecoins for trading.

In general, the stable currency issued by the public blockchain has good credit to a certain extent, and the more stable value makes it applicable to the most basic financial means-settlement. It works with the public chain token existing as an incentive mechanism in the blockchain network.