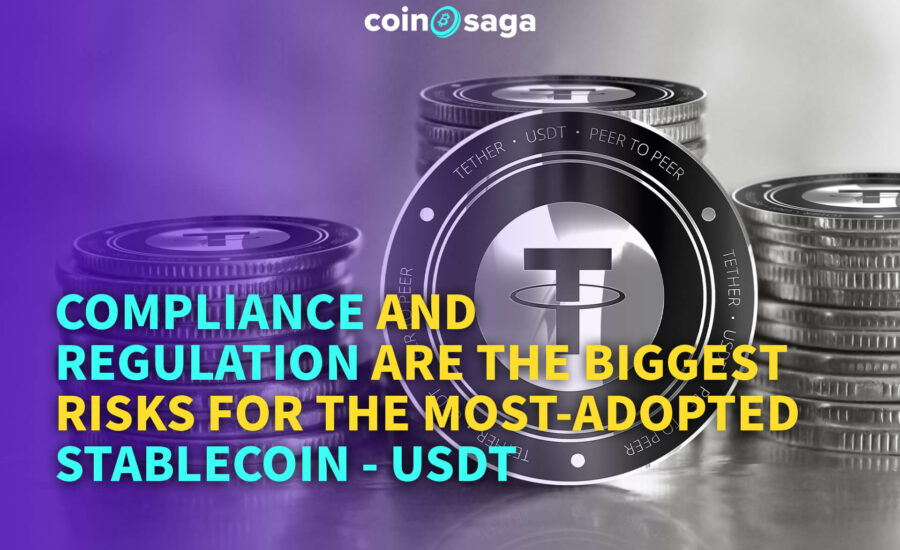 Compliance is the biggest risks for USDT

TetherUSD, or USDT for short, is a price-fixed digital currency asset implemented through the Omni layer protocol for Bitcoin blockchain transactions. Each USDT is backed by a U.S. dollar held by the Tether company, and these currencies can be accepted and redeemed through the Tether platform. USDT can be used for transfer, storage, payment, and consumption, just like Bitcoin or any other digital currency.

The establishment of USDT is to provide users with a stable currency for Bitcoin, and to support cash exchange and the current trustless wallet value audit. USDT uses a value reserve guarantee to provide an alternative proof of solvency.

Users can wire-transfer US dollars to bank accounts provided by Tether through SWIFT, or exchange for USDT through Bitfinex and another cryptoexchanges. When redeeming US dollars, the reverse operation is sufficient. Users can also exchange Bitcoin for USDT on the above two websites. Its website claims to strictly abide by the 1: 1 reserve guarantee, that is, for every USDT coin issued, its bank account will have a fund guarantee of $1. In terms of compliance, all operations involving fiat currencies require users to complete KYC certification.

Under Tether’s reserve certification system, the recycling of USDT can be easily checked on the Bitcoin blockchain through the Omnichest.info tool, and the total amount of US dollars held as an endorsement is announced by the bank deposit balance. Proof of reserves are regularly audited through professional audits.

The biggest problem for USDT is the problem of poor transparency, compliance, and regulation.

If it weren’t for the US law enforcement agency’s investigation, people wouldn’t know that $850 million were frozen, and thatvBitfinex had used $700 million of USDT reserve assets (internal affiliate borrowing), resulting in a decline in the USDT reserve rate from 100% to 75%. Due to the opaque operation, we have no idea whether more funds have been embezzled since this incident.

If the issuer of USDT is convicted, whether it is criminal or civil, it may face high fines, and this part of the fines may also involve the reserves of USDT.

Therefore, insufficient reserves and a failure to achieve 100% acceptance are the biggest risks for users holding USDT. If there is a systematic run-off, USDT may be significantly de-anchored, and users holding it will face losses.

The third risk is the clean-up of Chinese regulations. Everyone knows that USDT is actually a product of free-market pricing of US dollars in the Chinese market. There is also great uncertainty about how long this “freedom” can last.

Is a USDT backed reserve reliable?

Since USDT does not publish audit data anymore, we cannot know the composition of the reserve fund in the USDT fund custodian institution. USDT is a stable cryptocurrency of the US dollar, but is the reserve fund all in US dollars? Is it possible for institutions to make reserves for the digital currencies that have been incorporated to maintain price stability? What is the ratio? What is the incorporation algorithm?

The status of the reserve fund is not disclosed. On the one hand, there is a risk that it cannot be redeemed. If a stable currency cannot guarantee redemption, then USDT will die soon. On the other, the stability of prices cannot be guaranteed.

The second is that institutions have used USDT to do a lot of basic algorithms and pricing design. If the price of USDT is unstable or there is a black swan, it will bring certain system-level risks.

In essence, the biggest risk of USDT is the cashing-out risk, but everyone will not go to Tether to withdraw, because most holders do not have a USD account, and if the institution wants to cash out, it is better to go for an over-the-counter transaction. USDT is a very liquid asset, the biggest product problem is the brand image, and the biggest tail risk is regulatory policy.

At Coinsaga, we hope that more stablecoins will emerge so that decentralization considerations and risks can be diversified. For example, to have an iGaming specific price-fixed cryptocurrency. We hope to see the emergence of more stablecoin applications on the blockchain network, whether they are issued through centralized hosting or decentralization.