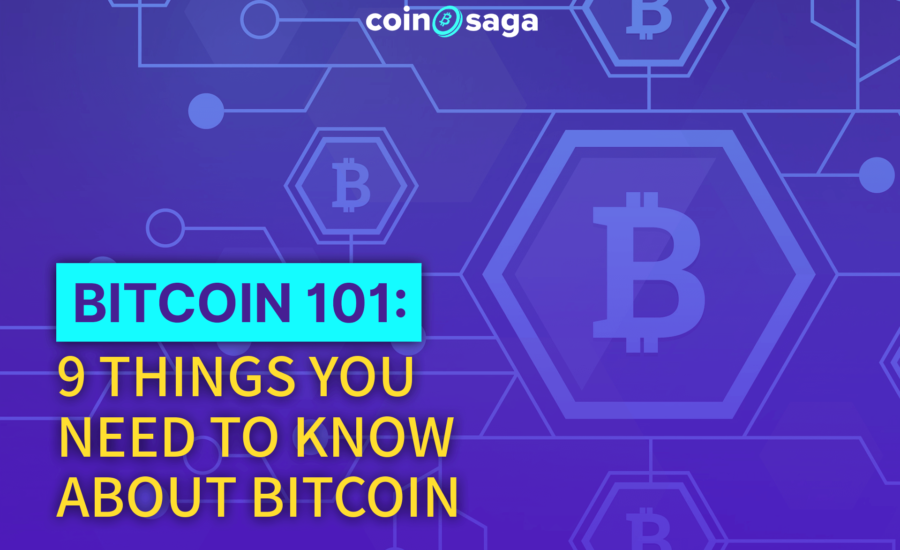 Bitcoin 101: 9 things you need to know about bitcoin

There’s a lot to know about cryptp-currencies, Bitcoin is everywhere these days. but these 9 things you need to know about Bitcoin can offer a good start., If you’re late the party, then worry not. CoinSaga has got you covered. Without further ado, here is Bitcoin 101: Everything You Need To Know.

With all the hype around Bitcoin, we think there are a few extra important pieces of information you should know. Here are our top 10 interesting facts about Bitcoin:

Bitcoin is a cryptocurrency. Instead of physical coins or paper bills, money is represented as a long string of numbers and letters. Because Bitcoins are not physical they can be instantly transferred to anyone/anywhere in the world.

Cryptocurrency is a digital currency that uses encryption and coding techniques that allow users to transfer funds without the use of a central authority such as a banking system. Bitcoin is the first available cryptocurrency.

Bitcoin was described by its creator, Satoshi Nakamoto, as a “Peer-to-Peer Electronic Cash System.” In order to decentralize a cash system, there has to be a general consensus among users on every single existing balance—that’s what a central server would do: keep records of balances and transactions.

When a user requests a transaction, the transaction is made known immediately by the entire network of users; but this transaction can’t be complete without confirmation. Confirmations are made by miners—a term we’ll discuss more in detail later. When a miner does their job in confirming transactions, they are rewarded with tokens of Bitcoin.

2.How do you get Bitcoin?

There are three ways you can obtain Bitcoin. You can buy them with dollars (or another traditional currency) using one of many Bitcoin Exchange like Binance; you can accept them as payment for goods and services; or you can “mine” them. Remember what we said about Bitcoin working by a peer to peer network of people who donate computing power to verify transactions? Well, when you do that you earn Bitcoin as compensation.

Coinsaga aims for a ultimate bitcoin casino, you can have a lot bonus by use in bitcoin to play.

When you hear about bitcoin “mining,” you envisage coins being dug out of the ground. But bitcoin isn’t physical, so why do we call it mining?

Anyone can be a miner, and miners exist to prevent users from abusing the system and forging transactions. Using algorithms, miners have to connect new block with their predecessors. Basically, these miners are solving a bunch of puzzles to build a block and add it to a blockchain. You can learn more about blockchains in the next section.

When a miner has accomplished this, they have earned the right to add coin-base transactions that reward them with a specific number of Bitcoins. Miners can only work for so much Bitcoin at a time though, in order to maintain balance in the system.

Later on, people also refer a reward of behavior as “mining”, for one instance, Coinsaga will reward our player a gamification coin called “Sagacoin”as a right representative token of Coinsaga to our player when they are wagering. Please stay tuned for this new feature.

4.What is a Bitcoin wallet?

A Bitcoin wallet is a long string of code (an address) that has a corresponding password (key). Online and app-based wallets are great for short term storage, but can be susceptible to hacking, so large amounts of Bitcoin are better off stored in paper wallets (what users call cold storage). There are many different wallet options out there, and we will delve into the options in another post. Baby steps.

Coinsaga will provide a multiple cryptocurrencies integration wallet system, our player will not required to have their own bitcoin wallet anymore, it will integrated with your casino cashier.

5.How are payments made?

Just like in the offline world, a wallet holds the key to making payments. It’s actually easier and faster to make a payment with Bitcoin than any traditional credit card or PayPal transaction online. You get a web or app based wallet, key in the recipients address, enter payment amount and press send. The fees are much lower and you can send Bitcoin any time of day or night without 3rd party assistance. Coinsaga makes the player to use bitcoin deposit and withdrawal easy-peasy.

If you want to send Bitcoin to another user, in very simple terms, you simply transmit the message that you need to transfer a certain number of Bitcoin from your ledger to another user’s ledger (in Bitcoin parlance, a “node.”). A node is just another word for your computer. The block chain recognizes the code, makes the adjustments to their ledgers and verifies the transaction. There is no need to trust anyone in the system to “protect” your money because the entire system is completely trackable while still being “anonymous.”

Hackers and government agencies have the means to track pretty much anything, including Bitcoin. If someone can connect multiple nodes to the Bitcoin network, the combined data collected from these different nodes might be enough to determine where a transaction originated.

Every Bitcoin transaction requires a kind of digital signature, based on math (a complex algorithm) rather than handwriting. When a new account number is created, it also generates a private key that is linked mathematically to that account number and stored in your wallet. The wallet holds keys to every transaction and each signature is unique to each transaction.

Every single fiat currency in the world is created, released and controlled by a single entity – in most cases a central bank. By law, ordinary citizens are only allowed to buy, sell or keep the currency. If someone tries to create any amount of money, they will inevitably find themselves behind bars.

When Bitcoin was introduced, it created a completely new and unique paradigm. The world’s first digital, decentralized currency that isn’t controlled by anyone at all. Moreover, the very concept of Bitcoin implies that anyone with enough computing power can create coins by simply being an active part of the community.

As it’s becoming more and more mainstream, law enforcement agencies, tax authorities and legal regulators all over the world are trying to wrap their heads around the concept of cryptocurrency and where exactly does it fit in existing regulations and legal frameworks.

The legality of Bitcoin depends on who you are, where you are in the world, and what you’re doing with it. Here’s our guide on legal issues concerning Bitcoin, where we mostly focus on the US but cover other major countries as well.

In many jurisdictions, the authorities are still struggling to understand Bitcoin, let alone define it in legal terms. Many concerns have been raised over its decentralized nature. It seems only natural for governing authorities to be worried about a financial community that can’t be fully controlled.

This also extends to exchanges and protection of people’s funds. While US-based exchanges have to be regulated, there are plenty of offshore platforms that don’t. Indeed, the cryptocurrency history has been filled with instances of exchanges suddenly shutting down and running away with people’s funds.

7.Is gambling with Bitcoin legal?

As of today there are no single, clear-cut answers to this questions. However, In general there are no specific laws regulating Bitcoin gambling. It is neither officially allowed nor prohibited. Attitude of different authorities to Bitcoin is changing quite rapidly, with more and more countries looking at Bitcoin positively and discussing regulation of cryptocurrencies and blockchain-based services. However, most governments today are still not referring to Bitcoin as to real currency. If it’s not a “real” currency, any regulations around traditional (fiat currency) online casinos should not be applied to Bitcoin gambling websites.

Despite the above, in countries where gambling is strictly prohibited, like the United States, the authorities may still take strong measures against Bitcoin gambling websites and/or gamblers who make wagers with Bitcoin.

A few reputable gambling jurisdictions already issue licenses to casinos accepting Bitcoin (notably, Curacao and the United Kingdom), Coinsaga.com is jointly owned and operated by NewLinetec B.V., a company based at Curacao, under gaming Licence number 1668/JAZ issued by Curacao eGaming, authorised and regulated by the Government of Curacao, which means Coinsaga accept the responsibility of controlling operation of cryptocurrencies. As long as the coinsaga casino is following the rules and regulations of the chosen jurisdiction, it operates legally.

Bitcoin has been called “the digital gold.” Think about the Gold Rush and the country’s push to mine as much of it as possible. That’s how Bitcoin is now.

Yes, Bitcoin is used frequently on the black market due to its relative anonymity, but there are plenty of places, at least within the U.S., that allow Bitcoin transactions.

Microsoft, Dell, REEDS Jewelers, Expedia, and Overstock are just a few places that accept Bitcoin as a legitimate payment. As Bitcoin gains popularity, more and more places will likely allow the use of Bitcoin. Coinsaga as the pioneer in igaming industry, we want to advocate our users to embrace Bitcoin and take benefit from its prosperity.

If you know anything about Bitcoin, you have probably heard the sensation described as a bubble about to burst. The cryptocurrency industry as a whole seems to be something that’s growing and growing, and eventually, it’s going to explode—and not in a good way.

New York University professor Nouriel Roubini described Bitcoin as “the mother of all bubbles”. It was about this time that the value of Bitcoin fell 15 percent and below US$8,000. To put this into perspective, the value of Bitcoin was almost US$20,000 at the end of 2017.

Some experts think that the bubble has already burst. Joshua Gans is the Jeffrey S. Skoll Chair of Technical Innovation and Entrepreneurship at the University of Toronto, in his exact words, “This is already a burst bubble. And it could burst some more, all the way down to zero.”

His reasoning behind his prediction has to do with his long-held belief that the government will rise against any kind of anonymous virtual currencies. This includes Bitcoin, of course. Rogoff’s opinion is that government regulations are likely to pop the Bitcoin bubble.

“It’s a sign of the market growing up, and it’s recognizing that cryptocurrencies are not a tool for money laundering or illicit use. I think it’s a step in the right direction,” Landsberg-Sadie said.

Another supporter of the growth of Bitcoin is a well-known name, John McAfee. If you own a computer, you probably recognize his name as he is the founder of the McAfee antivirus software. McAfee’s prediction is that the Bitcoin price will hit $1M by 2020. Since we have passed the first Quarter in 2020, there will be some difficult for bitcoin price from current $6500 to $1M with 9 months.

The world of Bitcoin is complex, and most people have a hard time understanding it. But these 9 facts should clear up a few important aspects of Bitcoin. Coinsaga believe the real gaming players are true adventures, to explore the unman land, that’s how to gain the real fortune!